At Zebra Deck Company, we pride ourselves and have built a solid reputation through word of mouth, referrals, repeat business and regular clients.
Contact Us

Quality does not come cheap, but it can be affordable. Zebra Deck is a family-owned business that relies on word-of-mouth promotion from our clients. We keep our overhead low, which means we pass the savings on to you, our client. We do not drive a fancy over-sized, over-priced truck, we do not spend money on excessive advertising and buying large-scale ads, and we do not hire out subcontractors to bid or build your deck. Russell, the owner and deck builder/designer, is who you deal with from bidding to job completion. Slick Salesperson, We are Not. We pride ourselves on bringing knowledge, courtesy, and respect to the customer round table. If you are expecting a schmoozing salesperson with fancy attire and a $100,000 car to do your bid, then we are not the company for you. If you are looking for the finest deck money can buy, built by a true craftsman and master carpenter, then Zebra Deck is for you --and Russell is your man.

Meet Russell. As a third generation master carpenter, Russell was born with one hand on a table saw and a hammer in the other. Once he was old enough to “play” in his father’s garage, Russell started building. Carpentry was something that came as a completely self-taught talent. It was only natural for Russell to grow up to become a highly skilled carpenter and craftsman.

Russell has spent his entire working life in the construction industry-- the last 20 years to be exact. He has worked on projects large and small from commercial remodels of universities to building residential homes from the foundation up. Jay quickly established himself as a talented carpenter. Upon moving to Toronto in 2005, the construction trade was in over-drive. In a sea of contractors, Russell found his niche–to become the deck-only contractor.

As an accomplished artist, Russell has always been hands-on and chooses to use wood as an expression of his creativity. Russell takes his work very seriously and believes a deck is one of the most important features of a home. That’s why, even though he is sought after to do remodeling and home building projects, his focus is on decks. In a place as beautiful as Greater Toronto Area, Russell believes everyone should have a deck for their home, where outdoor living can be enjoyed practically year-round.

Zebra Deck Company was born -- as a small family-owned company with high expectations and integrity. Russell is the owner and builder, while his wife, Iryna, assists with operations and marketing while juggling her own full-time career as a marketing director.

Zybra Deck is unique because Russell is driven by his love of the craft. He loves what he does and every deck is considered a signature work of art, built personally by him. 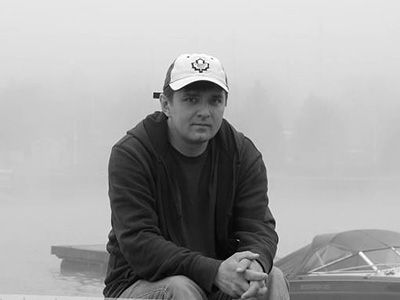 Knowing that we are licensed, insured and dedicated to the completion of your project to your satisfaction.

We won't start your project until pricing and terms are settled in writing. This protects you and our company.

You can count on us to build your project when Zebra Deck can set rigid deadlines for progress.